Supported by a Create NSW Arts and Cultural Grant

It was the comparative mythologist Joseph Campbell who once said you can tell what matters most to a society by the type of buildings that dominate the skyline.[1] Religious buildings may have ceased to be the tallest buildings in most town plans by the eighteenth century, according to Campbell, having been surpassed by taller ‘political palaces’—indeed, in colonial Parramatta, Burramattagal Country, the elevated position and grandeur of Old Government House, confirms it. Nevertheless, reading the broader townscape in a Campbellian fashion reveals that in Macquarie-era Parramatta, where the majority of the population in the young penal colony was comprised of convicts under sentence and emancipists, religion clearly still had a valued and essential role to play, too—for, in truth, Old Government House did not tower above all else on its own. Never is this more apparent than in the landscape paintings of the convict artist, Joseph Lycett. His three views of the town of Parramatta circa 1819–1820 are all visually framed by a veritable triumvirate of architectural symbols of power. 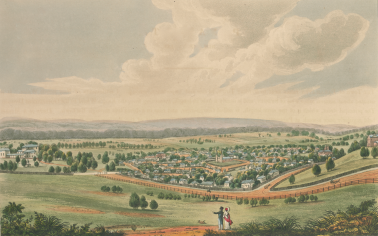 Old Government House is depicted in its elevated and noted ‘strategic’ position on the hill to the far left of each of the Lycetts, in present day Parramatta Park. [2] On an opposing hill to the far right, however, in an equally imposing and authoritative position, just metres from the cemetery in which the so-called ‘Flogging Parson’ the Reverend Samuel Marsden buried so many of his parishioners, a ‘large…red…brick building’ stands ‘towering over all surrounding objects,…overlooking the…centre of the…town’ and parish of St. John’s.[3] At the time of Lycett’s painting, it was the recently completed official residence of the Principal Chaplain and, thus, the seat of religious power in colonial New South Wales: the Francis Greenway-designed St. John’s Parsonage, Parramatta (1816). This classic Georgian symmetry—created by the town planners (who cleverly exploited the natural features of the landscape), reflected in the convict architect Greenway’s parsonage design, and captured by the convict artist Lycett—reveals the power of the Church represented on one hill, and the State on the other—both surveying, in tandem, their spiritual and temporal dominion. The triumvirate finds its resolution in the focal point of St. John’s Church, preaching piety at the town centre and dwarfing the surrounding buildings by piercing the heavens with what were at the time (and by no means coincidentally) its newly completed twin towers and spires.

But, just as Campbell’s insightful comment implied, one generation’s tallest buildings are overshadowed by still taller ones, representing values that are very likely the antithesis of those they supplant. In older European towns and cities, the domination of the medieval cathedral gave way to the eighteenth-century ‘political palace,’ and by 1909, it seems, the far younger town of ‘Parramatta’ was already beginning its transition to a ‘modern city’ in which, Campbell noted, ‘the tallest places are the office buildings, the centers [sic] of economic life.’[4] In some cases, of course, this domination of one set of values may not merely lead to overshadowing of those formerly prominent structures and symbols of power, but to total erasure. So it was for the parsonage: the historic landmark and one time ‘beauty spot of Parramatta’ had, according to some, ‘outlived its usefulness.’[5] Thus, in the first few days of 1909, the parsonage, the first major work in the colony by Greenway, the ‘Father of Australian Architecture,’ was reduced to a pile of rubble—nothing more than a bygone.[6]

Where the Principal Chaplain of New South Wales once kept a watchful eye over his ‘flock,’ drivers now pass unwittingly through the busy intersection of O’Connell Street and the Great Western Highway.[7] Despite its untimely demise, or that few now even know that a building so commanding ever existed on the crown of the southern ridge, St. John’s Parsonage, Parramatta occupies as prominent a place in our history as it once did in the town. In this publication, therefore, I take the parsonage building itself as my biographical subject, detailing its birth as a Georgian Parsonage, its rebirth as a Victorian Private Mansion and Ladies’ College, and its premature death in the Edwardian era, whilst also highlighting the various characters who were responsible for its creation and destruction, as well as the many and diverse people whose lives played out within the walls of this historic home and ‘lost landmark.’

[7] Based on the inexact science of overlaying the 1844 town map with present-day Google Earth and Google Voyager maps, the parsonage, including its outbuildings, appear to have been situated on land that is now covered by the intersection itself and the late twentieth-century block of flats and associated carpark on the intersection’s northwest corner.